The Trials of Brewing Porter 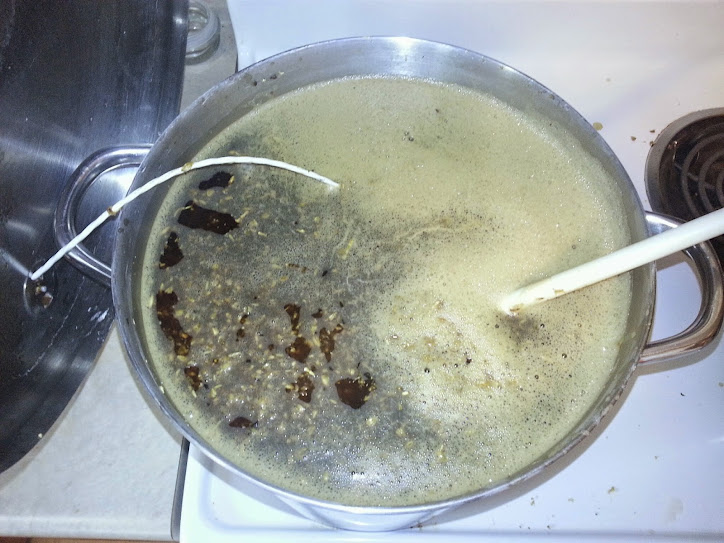 Last week, my family and I made another trip out to the lovely shores of Delaware with my in-laws. As always, it was a delightful week on the beach and boardwalk, and of course, the trip would not have been complete without a trip to Dogfish Head Brewing. While there, we sampled several beers, but the one the caught my attention the most was a concoction called Theobroma. It is a light colored ale with a healthy dose of chocolate and other complementary herbs. I was inspired to try brewing something with cacao nibs myself, and since I have never brewed a porter (really? in six years of home brewing?) I made up a test recipe with two-row pale malt, some 60L crystal malt, and some chocolate malt. My hop additions alternated between Kent Goldings and Hallertau at 60 minutes and 30 minutes, and then a combined addition of both varieties at two minutes. Then I dumped in four ounces of cacao nibs at flame out.

Now listen, on every brew day I strive for a swear-free experience. And I nearly achieved that goal today. I made past a stuck sparge, in which the hot liquid in which the grains were soaking wouldn’t drain off as it is supposed to (no problem…transfer the mash to another vessel and ‘unstick’ it). I weathered a wort shortage in my boil kettle (no worries…just top it off with some hot water). But then it came time to run the hot wort (the just boiled unfermented beer) through the chiller to get it to the right temperature for adding the yeast. This has to be done fairly quickly, because the longer the wort hangs around without yeast in it, the more vulnerable it is to contamination from bacteria or wild yeast. This process requires siphoning the hot liquid through a heat exchanger and into the fermenter. Because I had a lot of hops and cacao nibs floating around in the kettle, my siphon hoses kept getting clogged. Then, while messing about trying to sort that out, I twice knocked the hot water hose from the heat exchanger out of the sink drain and onto the kitchen floor. This was the final blow to my valiant effort to keep the brewing day family friendly. My poor, long-suffering wife...well, she decided to go run some errands.

I finally managed to get everything sorted out, cleaned up, and put away. Five gallons of chocolate porter is starting its fermentation in the basement. My beloved Cardinals are one strike away from a comeback win over the Pirates. I’m making tacos for dinner, then heading to soccer practice with my son. Not bad for a day off.

Well, Porcupine Brewing Company is officially Porcupine Brewing Company, LLC. Mostly thanks to my lawyer pal in San Diego who went above and beyond in not only advising me on the legalities of setting up the LLC, but went ahead and filed all the paperwork with the state of Missouri, and registered our company with Nolo so we have online access to just about everything we need to keep in the good graces of Leviathan.

A few weeks ago, my wife and I visited a homeschool convention in Cincinnati, Ohio. While we we wandering the exhibit hall, we came across a vendor called The Underground Movement selling some very cool t-shirts featuring legendary figures, places, and events from America’s past. The list on their display in front mentioned a Green Dragon Tavern t-shirt, but I didn’t see the shirt on the shelves. The Green Dragon was a favorite haunt of the Sons of Liberty in pre-Revolution Boston. Naturally, the Green Dragon has been a primary motivation for opening our own pub. I asked the vendor if he had any of the Green Dragon shirts available, and he said although he was asked by the convention organizers not to promote alcohol related items, he had a few put away that he could show me…you know, since I asked specifically about that one. My wife and I both left with some pretty cool t-shirts. Also, we saw some homeschool related stuff.

So, with that, I got a jolt of motivation to get things in gear to make the Porcupine a reality. First step: get incorporated. Next is figuring out funding and get the ball rolling. No time like the present, right? After all, brewpubs don’t open themselves…

It seems like such a beautiful day today, especially considering that a week ago snow was dumping on us in buckets and temperatures we’re dropping below zero. Today, though, is sunny and mild, and seems like a nice day to brew.

On the boil today is a brown ale. I’m making five gallons from an all-grain recipe I concocted based on what I had available. I’m lucky to have a neighbor who is a homebrewer on hiatus, who have me a bunch of ingredients and a grain mill.

I’m using eight pounds of 2-row malt, along with a pound of biscuit malt. There’s about 11 ounces of 120L crystal malt and a half pound of chocolate malt. I mashed all of these in three gallons of water at about 152°F for an hour. Then I sparged with five gallons of 170°F sparge water.

Once the whole thing is cooled to around 70°F, I’ll pitch in a starter of London ale yeast, and let out do it’s thing.

If it turns out well, this may be my entry in the National Homebrew Competition. I’ll post an update in about six weeks when it’s ready to drink.

Going for the Gold 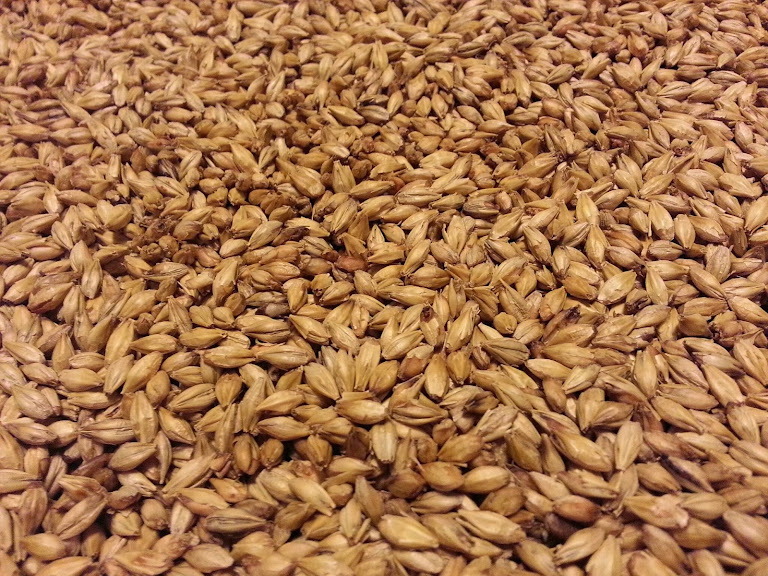 I was working on my business plan this morning–since it’s a snow day for me–when I decided I really need to think about some brewing competitions. Convincing potential investors and lenders to take a risk on a brewery might be slightly more successful if I can somehow show that I know how to make decent beer. What better way to do this than to earn some hardware for a recipe I plan on offering at the pub.

I was looking at the information for the National Homebrew Competition, and I think I am going to give this one a go. The question is what beer or beers to make? I think a natural choice is Porcupine Pale Ale. It’s a pretty basic recipe, but a stalwart ale that I hope will be the flagship beer at the Porcupine Tavern. So the question is how to make a pale ale stand out from the crowd? I really like my current recipe, but will it make an impression on a judge, or will it just be another pale ale. I guess there’s only one way to find out.

What are your thoughts on competition brewing? Should you concentrate on the basics, or engage your creative side?

Last night, like many people, my family gathered with friends to ring in the new year. We had some drinks, laughed a bit, and talked about life. I thought about how my plans for my brew pub, while still well alive in my mind, had been pushed to the lower parts of my priority list to make way for the more mundane and more present matters of earning a living. But it’s a new year, a time for reorganizing, and I mustered up the wherewithal today to dust off my business plan and have a go at it.

Then I remembered why it’s been languishing on the back burner: it’s hard to write a business plan. I looked at some of the information requested on my template, matters about insurance, marketing plans, business structure, in short, things I currently know very little about.

Nevertheless, in addition to the usual new year commitments to eat better, exercise more, and of course make more beer, I’m declaring 2014 the year of the Porcupine. Wish me luck!

Brewing With The Chickens

Today is a good day for making pale ale. So I’m hanging out in the back yard with the chickens, bringing some wort to boil, and contemplating having a beer at a quarter to noon. Because who’s going to stop me? 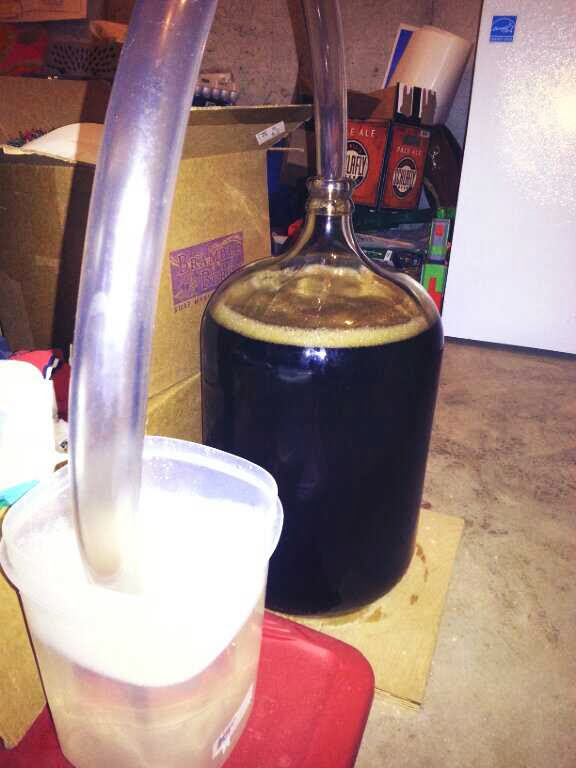 I go through “phases” with beer, both in drinking and brewing. Right now I’m in a stout phase. It started a month or so ago when I toured the Dogfish Head brewery in Milton, Delaware. While I was there I sampled a brew called Palo Santo Marron–which was really spectacular. If you get a chance to have a glass of this, do yourself a favor. Anyway, since then I’ve been interested in developing a really good stout recipe. In fact, I’ve got five gallons of my initial effort that needs to be kegged.

The thing about beer is that there is an infinite variety of styles. Out of the two main categories of ale and lager come a panoply of beers that vary in their color, strength, type of grain used, and hop intensity. Within any individual category there are still further subdivisions: stout beer can be classic, foreign export, Russian imperial, milk stout. Some brewers will add coffee, others cocoa, still others cherries. Some may combine these or other flavors. Some will use roasted barley as the only dark grain in the mash. Others will forego roasted barley altogether and use black or chocolate malt.

The batch I’ve got in the fermenter right now was made with ten pounds of mild malt, a pound of crystal malt, and a pound of black malt. I added an ounce and a half of Kent Goldings hops at the start of the boil, and another ounce and a half when there was about twenty minutes left. I made a yeast starter with Wyeast London Ale yeast. The idea is that if I can develop a decent basic stout recipe, then I can tweak it one ingredient at a time to see what interesting variations result.

The basic problem wit this approach, though, is that my attention span usually isn’t long enough to be so systematic with a single style of beer. By the time my next brew day rolls around, I’ll likely be on a different kick. I’d love to hear about your stout experiments, successes, and failures. In the meantime, here’s to stout!

Porcupine Brewing
Create a free website or blog at WordPress.com.